Skip to content
Cart
Free Shipping! Limited Time Only... ON ALL ORDERS OVER $50 (U.S. Only)

These hats are built to keep up with your while you're running, jogging, or cruising around town. These hats are so lightweight, you'll forget you're even wearing it.

With the moisture wicking inner band, sweat is redirected away from your eyes and face keeping your focus high.

Exclusive performance fabric made to withstand your most epic adventures. MORE THAN A HAT

The coaster fit has a slightly more pronounced crown / height, but still a contoured, rounded fit that follows the natural curve of the head. BUILT FOR PERFORMANCE; NOT YOUR EVERYDAY GENERIC HAT MATERIAL

Our mission is to create the #1 premium performance running hats on earth.  We've spent countless hours perfecting our hats and truly elevating them to the next level above anything that you'll find on the market; merging next generation fabrics and technology with some of the most ancient, yet sophisticated fabric weaving techniques dating back over 27,000 years to create the most durable, light weight running hats in the industry.  You have to try these to believe it. STAND PROUD WITH THE BEST HATS IN THE GAME

The Technology Behind the Hat

Light as a Feather

Use Over and Over

These hats are built to keep up with your while you're running, jogging, or cruising around town. These hats are so lightweight, you'll forget you're even wearing it.

These hats are built to last; withstanding your most epic adventures.  Once you're done wearing, hand rinse in cold water and hang dry.  It's that simple.

With the moisture wicking inner band, sweat is redirected away from your eyes and face keeping your focus high.

I bought this last month and I literally did not know anything about photography. Lots of features and great photos, using it to practice an hour a day.

I bought this last month and I literally did not know anything about photography. Lots of features and great photos, using it to practice an hour a day.

Great fit and keeps my head cool during my runs! Also, the Coaster Splash is waterproof and looks super cool!

So the Alter Ego box comes in the mail, my wife (also a runner) asks what's in the box and I say it's a hat. "Another Hat??" she asks, because I've bought a lot of running hats looking for the perfect one. "Yes", I say, its a new running hat from Alter Ego, it has that sweat thing on the brow and is also waterproof. She does not seem amused at this statement, We (I) own several hats bought because of those same selling points. At this moment I'm getting a bit nervous that she's going to give me grief about buying another hat, specially an all white one, I can already guess what she's going to say: A white running hat? are you kidding me? That's going to get stained in a second. Well, at this time there was no going back so I opened up the box to finally take a look at my new hat, so I carefully open it while she's looking over my shoulder. I pull out the nice zip lock bag in which the hat is in, take the hat out..."That's a nice hat" she says... YESSS!!! So at least she likes the look of it, I'm +1 at this point. I go to try it on and it did not fit, I had forgotten to adjust the tabs on the back. Before I can adjust it she asks to try it on, I hand it over and start reading the nice note that was inside the box. She puts it one and goes to the mirror, "This is a really nice hat, and the fit is great" she says, as she twists and turns and flips her hair here and there in front of the mirror. This is the moment when I feel the sorrow of a little kid that was super exited with his new present but someone took it and is playing with it before he got a chance himself. Still, I remain quiet and let her do her thing. "OK, I like it" she says as she hands the hat over and I desperately adjust the back so I can finally try it on....Wow, It Is a Nice Hat! My inner kid is so happy.

I sweat like I get paid by the ounce: This hat keeps me drier. It pulls the sweat to the bill and I can shake it almost dry and put it back on. It looks great and keeps me running longer. Buy a bunch! I have 2 and will buy more!

Great fit, Great feel, I love everything about this hat! Not to mention it has a great look, as well.

I am an avid runner and was in the market for a new hat for running and everyday use. I found Alter Ego on Instagram and was instantly attracted to the "Coaster" Splash (Black Camo/Flag) - Good Vibe Camo Collection. I love this hat for several reasons: the American Flag Patch, the camo design, and the comfort and fit. My order was shipped quickly, and the branded packaging was a very nice touch. I reached out to the customer service team with a suggestion to improve the hat, and they were very receptive. I will recommend this company as well as purchase gifts for my friends and family. 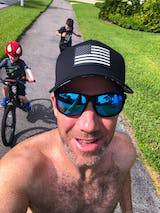